I’ve done a lot of electronics soldering before, but jewelry soldering is a completely different animal.  Temperatures are much higher (we used oxyacetylene torches) and the solder is much stronger.  Fluxing is extremely important, but what really floored me was the minuscule amount of solder ideally used – this isn’t like soldering copper water pipes, where you smear some flux on, heat up the joint and feed the solder wire into the junction.  Instead, you clip off teeny little 1/32″ sized pieces of solder from the already small gauge (and surprisingly stiff) solder wire and delicately arrange them along the solder joint (which should itself be as close and tight fitting as possible), using the flux to hopefully keep them in place while torching the whole mess.

These were the first two joint types we started out on – a post on a surface and a right angle.  Only a single little piece of solder was needed for the post, and the right angle used little pieces spaced at about 1/4″ intervals along the joint.

I placed the solder on the inside of the right angle joint, so the outside has a nice, clean, thin line of solder.  I’d then sand down the little bit that stuck out if I was making a finished piece.  The butt joint piece is a copper/brass sandwich that I started sanding down the surfaces on (Chuck went nuts on the piece that he did and basically had a mirror finish after a great deal of sanding and buffing – absolutely no solder was visible when he was done).

There was another piece that we were to try – a hemispherical piece attached to a plate (basically just a bump) which used the clever technique of applying white-out to keep the solder from running (yellow ochre can also be used).  Like all the other examples, Frankie made it look easy.  I managed to blacken the part into oblivion with no adhesion whatsoever.  So I hid the evidence and moved onto trying to make a ring (the intended end product of the class, after all).

My first attempt at a copper ring (on the left) was, well, an attempt.  Two little blobs of solder looked to be very weakly holding the ends together, so I thought I’d just pop them apart by smacking a dapping tool through the ring.  No such luck – though those little solder bits may appear feeble, they are strong.  I opted to just start over and fluxed the next joint a little more carefully and applied a bit more solder as well.  The resulting ring (on the right) was far better, and I was quite satisfied with what I had learned (not even having touched the sterling silver pieces we were given for making our final rings).

For the welding class, we were to make either a vessel or a sculpture.  Chuck immediately thought of trying to do something with the gas tank on his bike, but not having been struck with the urge to modify the tank on my GS500, I looked around for what the heck I could try to make.  I finally hit upon a gas can, as it was small enough that I could make it from the allotted sheet of steel.

I laid some newspaper down on the gas can and then wrapped the whole thing in masking tape.  I then sliced the tape/paper layer off along what I felt were reasonable edges and make cardboard templates.  After tracing the templates onto the sheet metal, I then cut out the pieces.

I started with the bottom piece, as I was eager to try hammering on the shot bag.  You can’t just bash away at the metal as a release of pent-up aggression, but rather you have to carefully sculpt it.  Notice the notches I made in the template at the corners – I found these weren’t nearly big enough to allow the corners to bend as much as needed, and I kept having to open them up further and further.  Naturally I went too far eventually, and quickly realized that this was far too ambitious a project for a 3 night class, not to mention being a raw beginner.

With this realization, I decided to skip trying to actually join these parts together into a cohesive unit and simply toyed with running them through the English wheel, planishing hammer, shrinker and stretcher to understand how to use those tools to shape the metal.

I backtracked a bit and decided to try something much more prismatic and simple.  I figured I’d roll a sheet into a cylinder and cap one end with a plate to get something roughly cup-like.  Of course, I then decided to make things a little more complex by going for a cone rather than a cylinder, but it was still simple enough to be successful.  Successful in shaping it, at any rate.  MIG welding sheet metal is a tricky process, I quickly found – blowing right through a hot joint is all too easy, and I started wishing for a TIG torch (not that it would have done me much good – I’m still an amateur on TIG, but I did miss the extra control that it gives on delicate pieces).  Once I had finished the vessel into something that wouldn’t leak wouldn’t break apart when I dropped it would stand stably on a table without falling over, I called it a night and just watched Chuck while he worked on his tank decorations. 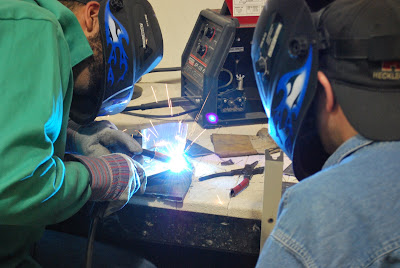 The last session was basically an open session for people to work on things from other classes.  Chuck worked on a bit of soldering and powdercoating, and I thought I’d give anodizing a go, as it consisted of a good deal of waiting (the Thunderbirds were in town for the airshow and I was rather distracted by the sight of aircraft flying around outside).  The first piece I tried was an ‘oops’ Roundhead body that I had brought along (it had shifted while machining, making it unsuitable for actual use).  It had been freshly tumbled with ceramic media in the vibe deburrer (which will itself hopefully be the subject of a future post), and I wanted to see what sort of anno could be had with it.  Frankie helped me wire it up and clean it, and then we let it sit in the anno bath for 45 minutes while I alternated between looking out the window for airplanes, trying to find airshow traffic on my scanner radio, and annoying Chuck.  After the anno bath, I elected to try a dye labeled ‘Fiery Red’ for a color, which turned out to be a really nice shade.  Once the dye was sealed, the finish on the piece was slightly dull, but I expected this, as you simply can’t get the really shiny finishes without an electropolish or bright dip (both well outside the means of a hobbyist sized anno operation).  Frankie suggested giving it a coat of wax, so I used a bit of Renaissance Wax on the surface.  After buffing it off, I’d be hard pressed to tell it apart from a commercial bright dip anno.

I also tried another piece that I applied a hammered finish to (using a cross pein hammer).  I really like the look of this finish and am pondering doing a Phantom in this hammered pattern over the entire surface.

Last month Chuck forwarded me an innocuous sounding email from the local vintage motorcycle mailing list.  There were a few metalworking classes being held at the art school at UWM, and he was thinking of signing up for a few. They did sound intriguing, and I figured I’d tag along with him for the soldering and welding classes (I had taken TIG and stick welding classes before, but welding/forming sheet metal was new to me, and I really wanted to learn soldering techniques for when I eventually try tinkering around with brass paintguns). The emphasis on hand work both intimidated and excited me – I’m used to the sharp, prismatic capabilities of mills and lathes, and the ability to create free-flowing shapes without use of CNC is a skill that I covet and admire.

Being that the classes were run through the art school, I was a little apprehensive – I’ve never really ‘gotten’ fine art, though I have certainly tried. I did take an art history class as an elective long ago, and though I did come away with an appreciation for the intent of the Dadaists and marveled at the technical skill of the Trompe-l’œil painters, I just can’t get past the attitude that seems part and parcel of ‘art’ – the feeling that ‘art’ is more and more meant only to be consumed by others in the field, removing it from the reach of the common person. I checked out a DVD of Chihuly Over Venice at the library a while back, as glassblowing certainly takes a great deal of skill and I wanted to learn more about the craft. However, the video was disappointing – Dale Chihuly struts around the whole time, commanding other glass blowers in what to do, and the end result is a bunch of twisted orange glass hanging from some steel pipes that he had no hand in the actual making of. I wanted to see more of what the craftsmen were doing, as they should be given the credit for creation. It basically reinforced my appraisal that to be an artist requires only two things: a beret and an attitude.  (Addendum – I’ve since found that Chihuly had suffered a shoulder injury some time back that left him unable to continue doing his own glasswork, thus he relies on other craftsmen. I have to give him a pass on that account, but I still don’t get his art.)

Still, the fact that our instructor, Frankie Flood, had an interest in motorcycles and had made motorcycle themed pizza cutters (which I actually remember seeing on a number of blogs last year, and could actually appreciate as artistic objects), I had hope that I could learn some new skills rather than simply be baffled by ‘art’. I was not disappointed. Class ran from 6pm to 9pm, though Chuck and I invariably stayed long after to chat extensively with Frankie over the widest range of topics imaginable, from machining techniques, to educational systems, to the philosophy of craftsmanship (we’ve all bought copies of Shop Class as Soulcraft). Refreshingly, even though Frankie was art department faculty, he had the same difficulty of wrestling with ‘art’ that I have had. When he elected to build a chopper for his thesis, his professors were abhorred, decreeing such work as lowbrow and worthless (wonder if they said the same of Roy Lichtenstein). He still struggles with this, noting that ‘art’ has become more about the ‘idea’ rather than the craft. It all leads me to wonder – maybe I won’t be able to ever understand ‘art’, but with artists and teachers like Frankie out there, maybe someday ‘art’ will understand us.